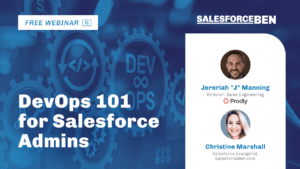 Watch as we team up with Salesforce Ben’s resident Salesforce MVP Christine Marshall to demystify DevOps for Admins!

DevOps has been helping developers make impactful changes to Salesforce data for the better part of the last decade.  But as a key role that spends their day to day inside of Salesforce, shouldn’t admins also be leveraging DevOps to implement, migrate, and release data?  How can Admins make the most of their release management strategy by familiarizing themselves with DevOps capabilities.